I got my new ravioli press a couple of weeks ago, and have been meaning to use it since then…this was my first attempt at making gram flour pasta, and my first ravioli to actually resemble ravioli! The press really does make it so much easier than trying to freestyle… 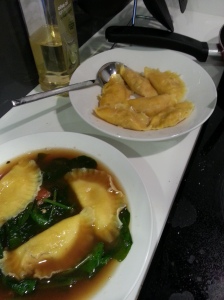 Anyway, for the dough I used 100g gram flour, 1 tbsp arrowroot (plus more for dusting onto the rolling pin/surface/press) and 1 egg. Combine, and chill for at least 1 hour to firm up slightly. It should be sticky but not too gooey.

It came together well enough, and rolled out pretty nicely. I rolled it as thinly as I could, before filling with crab meat (a mixture of brown and white). I actually ran out of crab before I ran out of dough, so I filled a couple with some shredded roast duck I had left over from the other night.

Cook as you would normal ravioli – in salted water at a rolling boil until they float. 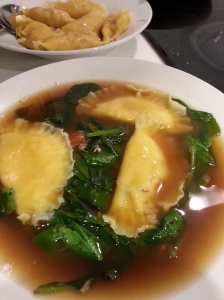 I had this with some duck and chicken broth and spinach 🙂

Note: I wasn’t sure if this was going to work – the gram flour dough isn’t that nice to eat by itself! I found it quite sour (?), but I think the salted water and the sweetness of the crab meat/duck stock balanced things out a bit.