It all started with the Allergy + Free From show in London earlier this month, where I made it my mission to sample every gluten- and dairy-free brownie I could find. What was I looking for on my mission to find the best brownie ever?

Who ever said I was hard to please?

The ‘winners’ were ultimately Oast to Host (http://oasttohost.com/) who have created what in my mind is the perfect brownie…well, almost. The one teeny problem I have with it is…it was verrryyy sweet. It had too much sugar for my taste, but that in turn helped it to achieve the perfect fudgy texture/crunchy top balance.

I decided to have a go at re-creating that elusive perfect brownie at home, and after scouring the internet for brownie tips realised I would just have to use some form of sugar, or it wouldn’t happen! I decided to try and make them as close to ‘real’ brownies as I could, so I used both sugar (shock horror!) and a form of dairy (even more shock horror! – although it was goat’s butter, which I seem to be able to occasionally tolerate).

These turned out quite well – they had a kind of caramel taste, and an ever so slightly crusted top. They weren’t quite perfect though – I didn’t manage to achieve the exact fudge/crust balance I was hoping for! Next time (yes, there will definitely be a next time), I’ll either continue with this avenue of whisking the egg white with the sugar, perhaps until stiffer peaks form, or I’ll go down the alternative recommended route of simply creaming together the butter and sugar and beating lots after adding the eggs. Who knows, one day I may finally crack it!

-100g 72% dark chocolate (half chopped, half melted), plus cacao powder to desired chocolatey-ness

I started by whisking the egg whites, adding sugar gradually until soft peaks formed. I mixed together the melted butter, the melted chocolate, flour, lucuma, salt, baking soda and cacao powder, before folding in the meringue-like mixture. I then added the chocolate chips and chopped dates before baking at 180 for about 27 minutes.

Once cooled, I melted the vanoffee and drizzled over the top, finishing with some 100% dark chocolate buttons I made with a chocolate mould.

Another reason these weren’t entirely perfect? I forgot to add vanilla, my favourite baking ingredient! I was so caught up in the process it just completely slipped my mind…thankfully the chocolate in the brownies and the topping both had vanilla so it wasn’t completely missing! I also wanted to add a little coffee powder, which I love doing with chocolate baked goods to bring out the flavour, but again I completely forgot. There’s always next time… 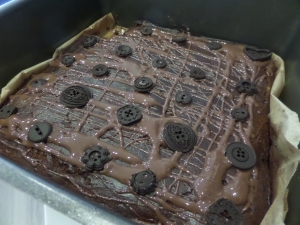